As I mentioned, my drive to my first gig in Nebraska was a bit of a haze. I remember stopping somewhere in the mountains in Montana late at night and finding a hotel to sleep in. Turned out it was next to the train tracks, crude oil trains running back and forth all night... I slept for maybe 4 or 5 hours then got on my way again. Things got a little dicey later on Sunday with my wakefulness so I had to stop and take a nap in my car. By Sunday night I really wasn’t sure if I would make it for my first gig, but with help from the lovely and talented Anne Heneberry (who made hotel reservations for me on Sunday night as I exhausting my driving capacity for the day), I was able to make it to a hotel within striking distance of my first gig the next day. I was already so grateful for me new (used) Toyota Sienna with all its bells and whistles that I'm not used to, like cruise control. They sure did come in handy during the driving. I'm pretty sure that I will destroy the cargo area of this vehicle sooner rather than later with all the gear loading and unloading and its plastic trim. We'll see how it lasts and whether I need to move back towards a real cargo vehicle soon, but for now surely am enjoying the bells and whistles!

One of my most vivid memories of the marathon trip to Nebraska was driving into Sunday night not knowing if I would make it to my first show the next morning and finding a radio station that was all Native American singing and drumming. Driving off into the unknown darkness listening to this haunting and beautiful music so rooted in this new and flat land that I have rarely traversed.

I showed up at my first school gig the next morning not terribly confident that everything would go smoothly. But all of my performing instincts just kicked right in even though I was dog tired. The show was a great success! The staff were quite friendly and the principle even invited me to stay with his family if I came back through the area on my tour or future tours. Wow, was I surprised that the first show went so well!

I was off and running! After the first week of touring I took stock. Sitting in a cafe in Canby, MN. I realized I had driven something like 2500 to 3000 miles in the past week and performed 12 solo shows in front of perhaps 1000 to 2000 students total. It was a HUGE challenge to get ready for the tour. It used to take me between 1.5 to 2.5 hours to set up and at least 1 hour to break down. In this first week I had had 15 minutes to set up at most shows. My new Fender Expo line array PA system didn’t sound quite as good as my Bose system but it sure did set up quickly and fills a gymnasium well. And I realizing that when I'm playing in echo chambers most of the time the added audio quality isn't really missed … well, maybe just a bit on the high end is missed. Anyway, all my work seemed to have paid off and I was able to get set up in the time I had and the shows were ROCKIN'!! Forget being big in Japan, I felt I was big in the Midwest with the K-8 crowd! 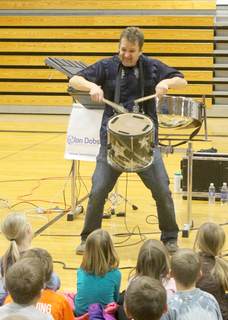 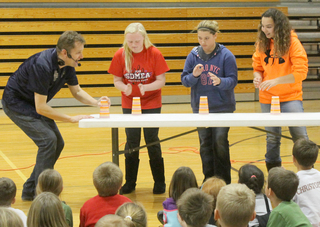 Now the trick was to settle into life on the road and figure out what to do on the weekends. Sisseton, SD, my first weekend stop, was not inspiring me at all. Here are some pictures of downtown Sisseton and the shuttered theater to give you some idea of why I was lacking inspiration. 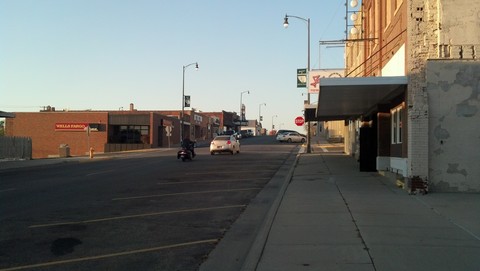 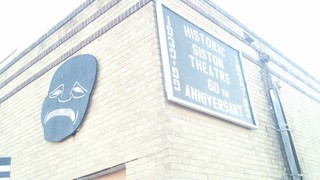 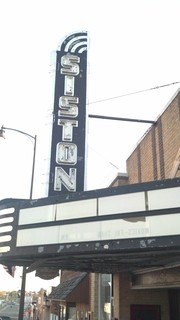