Ian Dobson got elementary students into the beat during the Dakota Assemblies session in the school gymnasium, Thursday, Nov. 20.
Using various percussion instruments, Dobson had the audience clapping, dancing and doing the limbo. Individuals and small groups of volunteers joined him front and center to illustrate the ease of learning rhythms. He demonstrated that rhythm is everywhere, from running in place, dribbling a basketball, to creating your own instruments out of recycled materials.
Dobson said that he guided audiences through a musical journey. He gave several examples of how, historically, different cultures have been restricted from music and instruments through slavery, controlling governments and extremely poor economics. Instruments can be clapping, cowbells, wooden xylophones, to the steel drum which is made by pounding out a concave surface from the end of a metal barrel.
Dobson said, growing up, he heard rhythms all the time. The washing machine had its own beat, and “I got pretty excited about clean clothes, and that’s just weird,” he joked. Dobson used a different term of “hambone” for the beat that some people recognize as shave and a haircut, ten cents. He said that it is the basic rhythm for hundreds of rock and roll songs.
He taught the students the “Mockingbird” song. He and two Philip instructors – Jessica Wheeler and Ella Smith – performed a dance routine from the musical “Grease.” Three students – Brin Heltzel, Mallory Vetter and Kiarra Moses – had practiced the cup song (also called “You’ll be Sorry When I’m Gone”) and did the motions as the audience sang the words. Mary Nelson was Dobson’s partner as they taught the audience to dance the cha-cha-cha.
Using his recording and play-back equipment, Dobson took sounds from student-made instruments to create a musical beat.
Dobson illustrated the versitility of the steel drum by using it to play “Flight of the Bumblebee.” He also showed that several rhythms can be played at one time. “You kind of have to shut your brain off to do that,” he admitted. Finally, the students had to return to class, but did so to a musical beat as they went under a limbo rope.
Dobson has earned a master’s degree in percussion and now entertains on cruise ships when he isn’t teaching. He finds that teaching kids through his entertainment is “vastly more rewarding, because I get to play for the kids. I get to be more creative.” He continued, “This is awesome because the kids really appreciate it. They are so inventive and creative,” he said. “I can try to inspire the kids, using our ingenuity to build a better future.”

Ian Dobson, with the help of Jessica Wheeler, left, and Ella Smith, taught elementary students a dance routine from the musical “Grease.” He illustrated that rhythm can be created from almost anything. 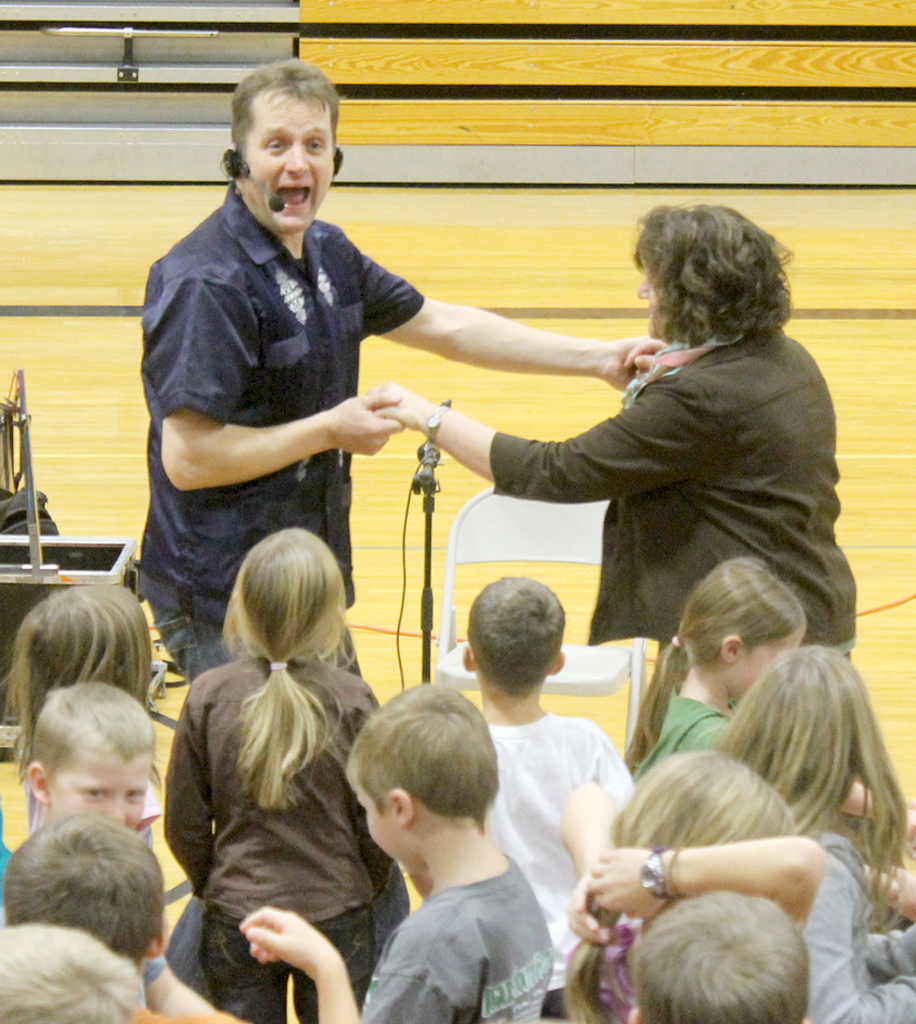 Ian Dobson, with the help of Mary Nelson, got the kids into doing the “Cha-cha-cha” as proof the kids could learn rhythm. 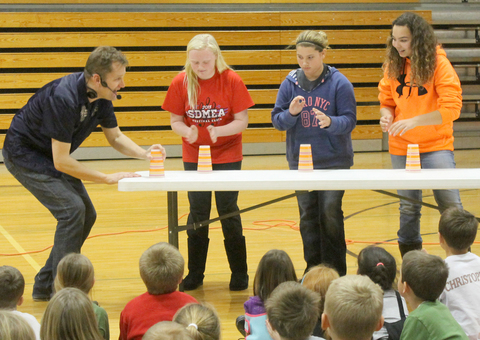 The syncopated actions were done by Brin Heltzel, Mallory Vetter and Kiarra Moses while Ian Dobson and the audience sang the words to “The Cup Song.”